A key figure in the Chinese Political Pop movement, Yu Youhan is equallyknown as a majorfigure in the Shanghai Minimalist movement. Born in Shanghai in 1943, he graduated from the Central Institute of Technology in Beijing in 1970. Presently he teaches at the Shanghai Institute of Industrial Arts. His influence on Chinese avant-garde art has been felt since the mid-80s. Later he started to paint abstract works. With his famous Circles series starting in 1983, he adopted the circle as the best form to articulate his concept. The circle as an abstract form results from the idea of "grasping things as a whole". He tried to use the relationship between dots and lines to illustrate the flow and changes within the matter of the universe. With the Taoist diagrams-like dots and lines as the form of abstraction, it demonstrates the deeply implanted Chinese culture in the works. This masterful rendering of the bright folksy patterns and his whimsical compositional approach create an unique style.

BIOGRAPHY
1943    Born in Shanghai, China
1970    Graduated from the Central Academy of Art & Design, Beijing, China
1973    Taught at the Shanghai Institute of Industrial Arts, China
1985    After visited Zao Wou-ki exhibition in Hangzhou and an abstract art exhibition organized by the Boston Museum of Fine Arts in China, he began painting abstract art in the 1980s
2012    For the first time in his illustrious career, he took up the challenge of extending his artistic expression to lithography
Currently living in Shanghai 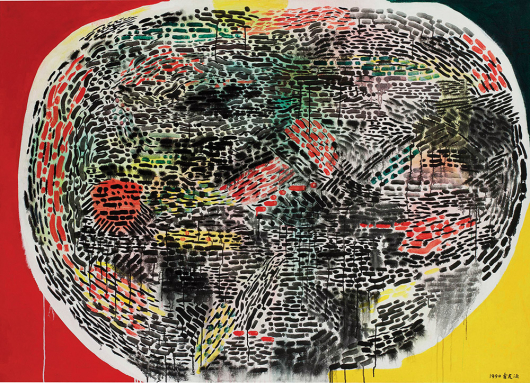