Growing up with a latent interest in the artistic process, the well-known and beloved local artist Chu Hing Wah in fact chose to train professionally as a psychiatric nurse. These two seemingly incongruent strands (artist and nurse) came together when enrolling in an evening course of art and design, Chu found his psychiatric patients to be a natural subject for his paintings. Their social isolation and mental anguish are captured in scenes of folk-like simplicity and stark poignancy. Since retiring from the nursing profession in 1992, Chu has chosen to concentrate on capturing the realities of Hong Kong life, including the effects of urbanisation in regions like the New Territories. We feature Chu Hing Wah’s latest works, which build upon his life-long preoccupation with the relationship between individuals and their environment at our two group exhibitions, including Asian Cultural Council Fellows First Annual Exhibition: A Charity Exhibition of Works by ACC Alumni in 2018, and Uniquely Hong Kong: A Celebration of Hong Kong Art in 2020.

Chu completed his degree in Psychiatric Nursing at Maudsley Hospital in London in 1965 and worked as staff nurse in Castle Peak Psychiatric Hospital from 1968 to 1989. After completing a Certificate course in Art and Design at the Extra-mural Studies of the University of Hong Kong, he proceeded to become a member of the Visual Arts Society in 1974 and the Hong Kong Sculptors Association in 1982 and was appointed Chairman of the Visual Arts Society from 1983 to 1986. He received the Urban Council Fine Arts Award in 1989 and was awarded 'Painter of the Year' by Hong Kong Artists' Guild Association in 1992. In 1993, he was granted a scholarship for art research in New York by the Asian Cultural Council. Recent exhibitions include Wan Chai Grammatica, Hong Kong Arts Centre (2018); Reunion, Exchange Square (2017); Artmatch 22nd Annual Exhibition, Jockey Club Creative Arts Centre (2017); Ink Asia, Hong Kong Convention and Exhibition Centre (2015); and Hong Kong, Hong Kong: Works by Chu Hing Wah, The University Museum and Art Gallery of the University of Hong Kong (2011). 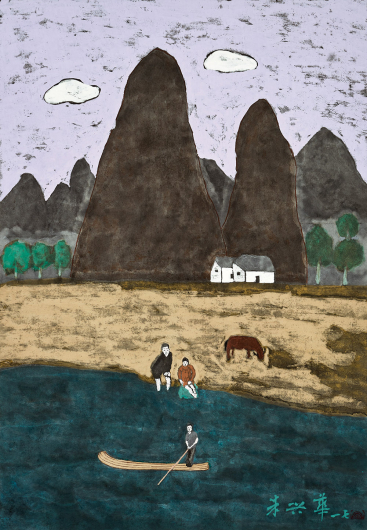