Li Huasheng was born in Yibin, Sichuan in 1944, and is considered one of China’s leading contemporary ink artists who made major efforts to revive the literati art form. In 1993, the University of Washington published Contradictions, a monograph on Li Huasheng, highlighting the life of the artist during Maoist China.

Having grown up during the rise of the Communist Party, he spent his early artistic career painting propaganda works in oil, and his nights studying ink painting manuals to satisfy his interest in Chinese traditional art. In 1973, he showed his work to the artist Chen Zizhuang, who later mentored the artist and inspired his later expressionist ink paintings –mainly of landscapes, for which he is best known. In 1981, his paintings were featured in a national group exhibition at the National Art Museum of China in Beijing. He first came to international attention after his paintings were selected to be part of the travelling exhibition Contemporary Chinese Painting: An Exhibition from the People’s Republic of China, which was displayed at eight different museums and art institutes from 1983 to 1986 in the United States. His paintings were also chosen to be included as part of the travelling exhibition Tradition and Innovation in 1995, which went on display at the Hong Kong Museum of Art, Singapore Art Museum, the British Museum in London, and the Museum of East Asia in Germany. Since 2000 his artistic practices have led him to experiment with full abstraction, taking the next logical step in realising landscape paintings. He passed away in 2018 in Sichuan, China.

Alisan Fine Arts first began representing Li in 1992 and held two solo exhibitions for the artist, including a 1998 travelling exhibition for the artist, which visited the Chinese Culture Center of San Francisco. Li Huasheng’s works can be found in the permanent collections of the National Art Museum of China, Beijing; the Metropolitan Museum of Art, New York; the British Museum, London; the Chicago Art Institute, Chicago; M+ Museum, Hong Kong; the Shanghai Art Museum, Shanghai; the Guangdong Museum of Art, Guangzhou; the He Xiangning Art Museum-OCT Contemporary Art Terminal, Shenzhen; and the permanent art collections of Harvard University, Yale University, University of Washington and University of Michigan. His works were recently on display at the Metropolitan Museum of Art, Los Angeles County Museum of Art and the Guangdong Museum of Art.

1973 Befriended the painter Chen Zizhuang (1913-1976, a personal bodyguard and cultural adviser to Sichuan’s last warlord governor). The two painters met twice in the three years they knew each other

1979 Lived in Beijing for three months

1980 Invited to demonstrate his art in front of Deng Xiaoping

1985 Appointed honorary member of the Sichuan Provincial Academy of Art in Chongqing, China

1986 Appointed and awarded the First Grade Master by the Sichuan Academy of Poetry, Calligraphy and Painting, China

1989 Awarded the First Rank Painter in the Sichuan Painting Academy, Chengdu, China
1993   the University of Washington published Contradictions, a monograph on Li Huasheng, highlighting the life of the artist during Maoist China

2000 Shifted to be a Maximalism artist in China and stopped to create literati paintings
2018 Passed away in Sichuan, China

Museum of University of Michigan, USA 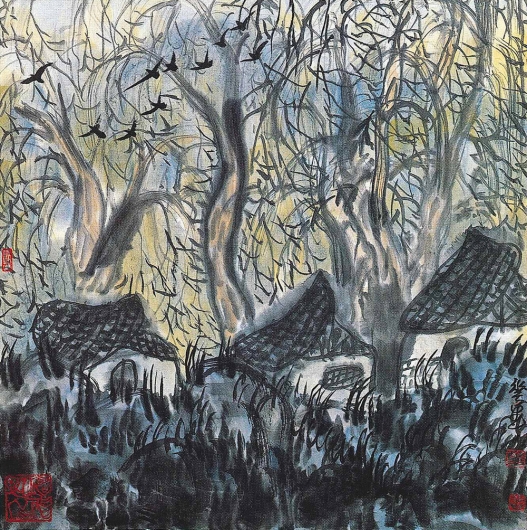