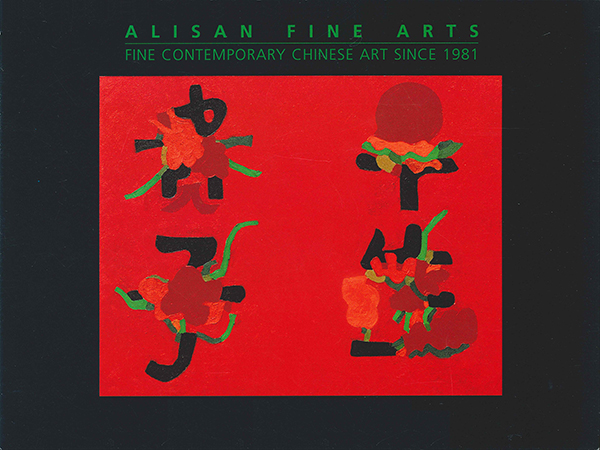 Luo Qi
Introduction
Alisan Fine Arts will be holding a second solo exhibition for Hangzhou abstract artist, Luo Qi at our new location in Aberdeen (Room 2305 Hing Wai Centre, No.7 Tin Wan Praya Road, Aberdeen, Hong Kong) from 5-31 December 2009. Our first show for Luo Qi was in 2006 as part of the French May Festival in Hong Kong. This new exhibition consists of 10 works, including 6 that are part of his most recent oil series “Calligraphy-painting”(2007-08) and ink series “Poetry”(2007). Fusing both tradition and modernity, the colour field “Calligraphy-painting” consists of pure red with “Luo Qi script” which is transformed from the ancient seal script, in which he combines calligraphic line, colour, shape and composition to create a graphic, geometric expression. It seems that Luo has abandoned the traditional calligraphic traces but, in fact, this is typical of his calligraphy-painting. His new ink series “Poetry” are clothes shaped paintings in ink and colour consisting of simple lines and colour blocks. They are inspired by Luo’s participation in Paris Fashion Week Autumn/Winter 2008/09 at the Louvre in France. His new ink works were exhibited at the Cleveland Public Library, Ohio, USA in August 2008. The open day of our show is on 5 December 2009 from 2pm to 6pm. After the open day, the exhibition will continue through 31 December 2009 but viewing will be by appointment only.

Luo Qi (born 1960, Hangzhou, China) is the founder and a leading figure of the post-modern calligraphy movement known as Calligraphyism in mainland China during the 1980s. He belongs to a group of Chinese artists who attempt to transform Chinese calligraphy into a contemporary idiom, challenging its aesthetic style and semantic function. A graduate from China Academy of Art in 1986 Luo has exhibited in major exhibitions in China and overseas - Italy, Germany, France, Luxembourg, USA, Japan, Korea, Thailand, etc., including the hugely successful exhibition “Brushed Voices: Calligraphy in Contemporary China” at Columbia University, New York in 1998. In addition, he published A Collection of Essays on Calligraphyism- A Conceptual Art, China, 2001. “Calligraphyism seeks to alter the basic structure of the characters themselves, even if they can no longer be read as writing. Calligraphy in this sense becomes pure abstract art.” Zhang Yiguo (Brushed Voices, Calligraphy in Contemporary China, USA, 1998, P.56)

Exemplifying both traditional and contemporary styles, Luo manipulates the form and structure of characters, and uses traditional brushstrokes to create non-semantic forms. By painting in bold, bright colours, borrowing from Pop Art styles, he breaks away from traditional calligraphy and incorporates a strong modern, abstract element reminiscent of Franz Kline or Robert Motherwell. To the Chinese eye, his paintings appear Western, but to the Western eye, they appear unmistakably Chinese.