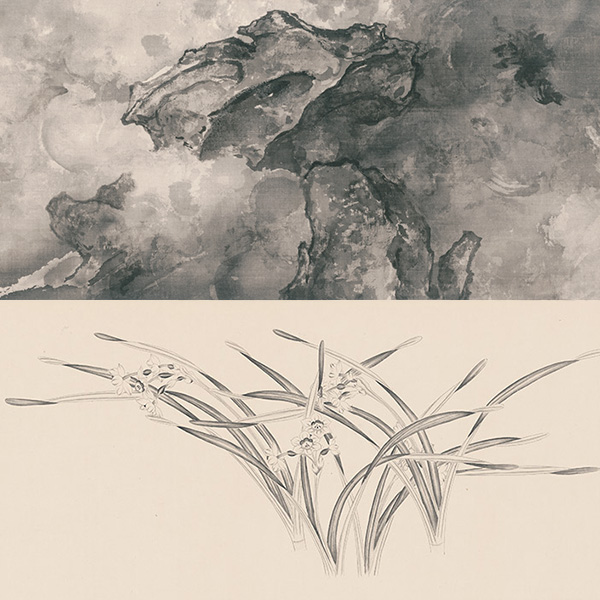 Tai Xiangzhou & Zhang Yirong: One with the Universe

Tai XiangzhouZhang Yirong Catalogue
Introduction
In the presence of the artists

Alisan Fine Arts is proud to showcase a joint exhibition of two celebrated young ink artists, Tai Xiangzhou and Zhang Yirong. The show features Tai’s ethereal landscape paintings and Zhang’s larger than life meticulous paintings of flowers and butterflies in painstaking detail. While Zhang’s works were featured in “Beyond the Jade Terrace”, a group exhibition organized by the gallery in 2014 for four young women Chinese ink artists, this is the first time we will be exhibiting Tai’s paintings.

Although working side by side in their respective studios in Beijing, the scholarly husband and wife team have developed their distinct pictorial language. Tai’s masculine paintings of barren landscapes are composed of misty monochromatic shades of grey leading us to question whether we see the whole picture or only a microcosm of the whole Universe. On the other hand, Zhang’s feminine black & white paintings of different flowers and butterflies are depicted in fine delicate lines conveying an inner strength and beauty. With this new body of work, they seek to explore the relationship between heaven and earth.

Looking at their paintings, it is obvious they both have a strong foundation in traditional Chinese ink and are inspired by Song Dynasty literati paintings. As suggested by the title “One with the Universe”, further inspiration is drawn from Zhuangzi’s (Taoist philosopher) “Qiwulun”, which argues that all things are equal premised on the recognition and respect for differences. One living being is not superior or inferior to another.

Tai Xianghzhou’s “Everlasting Nature” conveys this virtuous principle also through the subject matter of Heaven. The Chinese calligraphy inscribed explains that Heaven is complete as it does not serve itself, but benefits from all things and does not contend with them. It views itself as equal to other elements on Earth. For Tai Xiangzhou, Heaven is an emblem of humility. “Mighty Clouds”, “Propitious Rock from Heaven”, “Sky with Nine Heavens” and many other works featured in this exhibition share this recurrent theme.

Apart from the equality of things, the uniformity of matter is also explored when Zhuangzi dreamed himself to be a butterfly, which flew happily about. This is the Taoist idea of ‘naturalization’ between man and nature, the argument that they are one of a whole, and that physical differences can be broken down as they are both constituted of Dao (The Way) and the original Qi (Life Force). Zhang Yirong’s subject matter of plants, flowers and butterflies reflect this idea. In Zhang’s own words: “I hope people can also find their own peace and tranquility when looking at my works… The subject in the painting is not what is being painted. What we are seeing is our heart.”

By emphasizing the grandeur and beauty of nature in this exhibition, the artists hope to mirror Zhuangzi’s philosophy in “Qiwulun”.

Tai Xiangzhou
Tai was born in Ningxia Province to a scholarly family in 1968 and started studying calligraphy with Hu Gongshi since he was 7 years old. He graduated from the Department of Digital Media, Media Design School, Auckland, New Zealand in 2001. Although he had a successful career in media design and conservation, he decided to further his studies in painting and received a Ph.D. from the Department of Painting, Academy of Arts & Design, Tsinghua University, Beijing, China in 2012. He layers different gray ink tones on silk to enrich the brushwork and to give a misty atmosphere similar to the vast universe.

Zhang Yirong
Under the influence of her artist father, Zhang started painting at a young age. She obtained her BA from Communication University of China, Beijing in 2001, and a MA from Peking University in 2008. She has had exhibitions in USA, China and Hong Kong. Upon graduation, she spent eight years practicing under the internationally acclaimed artist Liu Dan, observing his stylistic code. She has created meticulous paintings that display her ability to capture painted subjects in exquisite and analytical details. Her art, which often feature a feminine sensitivity and natural style, is swept up in a wide range of classical influences and inspirations from the Song and Yuan Dynasties, particularly the Song Dynasty’s artistic tradition of direct observation. Zhang’s elegantly wrought compositions avoid hackneyed themes and instead focus on an organic source of perfected beauty.