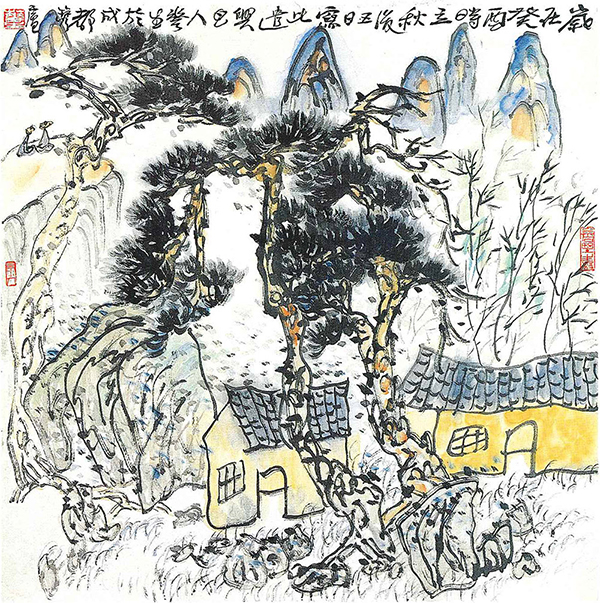 Scenes from the Village

Li HuashengNie OuShi HuFang Zhaoling
Introduction
Alisan Fine Arts is proud to present a group show featuring works by Li Huasheng, Nie Ou, Fang Zhaoling and Shi Hu this summer. On display are 11 works, which depict an idyllic and thriving countryside. The selected works are grouped around the four seasons: willow trees and kids riding cattle in spring, a girl in a floppy straw hat in summer, intrepid mountaineers in autumn, and twisting bare branches of trees in winter. These romantic and honest images are permeated with a sense of nostalgia for a simpler time. Together, the lively figures and frank naivety in Nie and Shi’s works, the tranquility in Li’s paintings, and Fang’s vitality, form a colourful pastoral. An echo of rural life in our modern society.

Nie Ou
Nie Ou was born in Shenyang, Liaoning in 1948, noted for her paintings with a naïve and amiable touch depicting the idyllic life in village. After Cultural Revolution (1966-76), she studied Chinese ink painting under Li Keran (1907-1989, renowned contemporary Chinese painter) at Central Academy of Fine Arts, Beijing in 1978. She had around 20 around solo and group exhibitions in mainland, Hong Kong and overseas including USA, Switzerland, Taiwan, Indonesia. Alisan Fine Arts presented Nie Ou a group show “Modern Chinese Paintings, A Selection from Beijing, Hangzhou & Sichuan” including Nie Ou’s works in 1989. Her works have been collected by National Art Museum of China, Central Academy of Fine Arts, Beijing.

Fang Zhaoling
Fang Zhaoling was born in Wuxi, Jiangsu in 1914. She studied bird and flower painting under Chen Jiucun (1898-1957), and landscape painting under Qian Songyan (1899-1985) in 1933. Entered University of Manchester, UK, to study Modern European History in 1937. After the turbulence of the Second World War, she returned to Hong Kong and became a student of Zhao Shao’ang in Lingnan School. By 1953, she studied under the renowned artist Zhang Daqian. Following Zhang’s guidance, learning from the paintings by Wu Changshuo and Qi Baishi and travelling to majestic landscapes in China, she sought out raw beauty and the vitality of nature throughout her life. Her style full of great vigor can be seen in the selected work “Climbing to the Top of Huang Shan” in this exhibition. Important exhibitions in recent years include “Paintings by Fang Zaholing, A Century Exhibition”, Ashmolean Museum, University of Oxford in 2014, “Fang Zhaoling, Vigorous and Fresh Chinese Ink Painting”, Alisan Fine Arts, Hong Kong in 2012, “Fang Zhaoling: A Life in Painting”, Asian Art Museum of San Francisco in 2005, “The Passionate Realm: A Retrospective of Fang Zhaoling”, Hong Kong Museum of Art in 1994. Her works are collected by British Museum, V&A Museum, London, Shanghai Art Museum, Hong Kong Museum of Art, etc.

Shi Hu
Shi Hu was born in Hebei in 1942. He studied at the Beijing Arts and Crafts College and the Zhejiang Academy of Fine Arts. He taught at the Beijing Arts Crafts College from 1968 to 1969. He made an extensive tour to Africa in 1978, and was inspired by the brilliant colours of the exotic cultures and wildlife. Shi then undertook a serious study in western art, especially Modernism and Abstractionism. He is skilled in painting figures and animals using boneless technique to create strong contrast of bright colour tones and his brushstrokes are also bold and strong. Shi was invited to the US as visiting scholar and later settled in Macau. Recent exhibitions include FINE ART ASIA, Alisan Fine Arts in 2014, solo show in National Art Museum of China , Beijing in 2013 and in Shenzhen Art Museum in 2005.