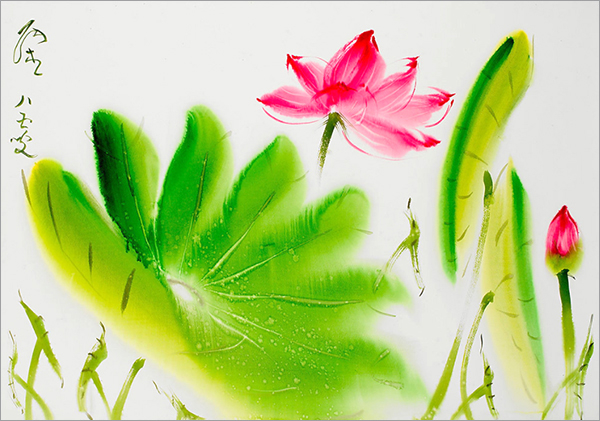 Chang ChiehChinyee
Introduction
Alisan Fine Arts is welcoming the year of the dragon with a show of brightly colored works by two Chinese artists, Chinyee and Chang Chieh. Both artists left China early in their careers and settled overseas. While remaining true to their Chinese heritage, their works are also influenced by the West in the use of medium resulting in paintings that are brilliant and energetic, full of vigor and vitality. Around 20 works will be displayed, including watercolours of lotus flowers by Chang Chieh and abstract paintings by Chinyee.
Chang Chieh張杰 (born 1921 Shanghai, China, currently living in Taipei). The celebrated Taiwan artist loves lotus flowers and brilliant colours and his artworks always depict a cheerful scene. Unlike traditional Chinese painting, Chang uses a Chinese brush with watercolour painted on watercolour paper. By using his calligraphy technique, his artworks give a modern and vital appearance of pinkish lotus flowers in full bloom with jade green wide leaves and stems.
Chang graduated from Chengtse Art College, Danyang, Jiangsu Province in China in 1948. He left China to teach in Taipei in 1949 and then set up “Chinese Watercolour Society” in 1958. He was invited to give speeches and painting demonstrations around the world from 1970s to 1980s, such as Taipei, Berlin, New York, Washington DC, Chicago, San Francisco and Los Angeles. He was awarded Honourable Mention at USIS/Taipei in 1960; Honourable Mention at Sao Paolo Biennial VII in 1963; Best Watercolorist of the Year, Taipei in 1967; The Supreme Painter in Arts by The International University, USA in 1990. He has had around 36 solo exhibitions and 30 group shows around the world since 1957, in countries including the United States, Brazil, Germany, China, Singapore, Japan, Vietnam, Hong Kong, Macao and Taiwan. Recently Chang has had solo exhibitions in both Taiwan & Shanghai. Chang’s first exhibition with Alisan Fine Arts was in 1981 and since then we have had four shows for him.
Chinyee青意 (born 1929 Nanjing, China, currently living in New York), Chinese New York-based female artist whose work combines both Eastern spirit and Western expression, has been esteemed by critics as “Lyrical Abstraction”. Her gestural and loose brushstrokes reflect both Asian brush techniques and years of careful study of modernist abstraction. The spontaneity of touch, the sense of excitement in the off-set compositions, and the unexpected bursts of colours are all genuine expressions of her mood, emotions and life experiences. She has her own studio in New York, and is still painting today. Her recent style is inspired by Mark Rothko (1903-1970, American Abstract Expressionist). Chinyee will have her solo exhibition in Beijing in May 2012.
In 1947, she was awarded a four year scholarship to study fine arts at the College of Mount Saint Vincent in New York. She then went on to receive a Master’s degree in Art Education from New York University in 1952. Her first solo exhibition held at Mi Chou Gallery, New York in 1965 heralded the beginning of a long career of frequent solo and group exhibitions, including the 1997 renowned travelling exhibition “Asian Traditions Modern Expressions; Asian American Artists and Abstraction 1945-1970”, curated by Jeffrey Wechsler, which toured for two years throughout the United States, Japan and Taiwan. In addition, her work has been honoured by UNICEF in its educational films, and by the U.S. Department of State “Art in Embassies Program”. In 2007, Alisan Fine Arts organized the artist’s first solo exhibition and retrospective in China, “A Lyrical Journey” at the Shanghai Art Museum.