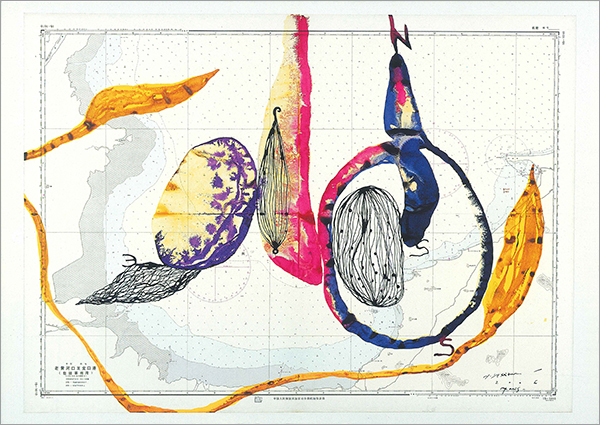 Catalogue
Introduction
Alisan Fine Arts celebrates this year’s French May with French contemporary surrealist artist Richard Texier’s first exhibition in Hong Kong. The exhibition features 17 new works in ink and colour on original Chinese naval charts of the China seas from the 1970s mounted on canvas. Texier has had a lifelong passion for the ocean and the universe. The works in this exhibition depict sinuous and surreal graphic forms drawn with the Chinese brush, which symbolise instruments used by explorers, such as the compass, sextant, divider and protractor. Together with the combination of earthly colours and dark navy, Texier opens his imaginary territory to the public.

Born in 1955 in Niort, France, Texier moved to Paris to study architecture in 1973. With the help of the French artist Jean Degottex (1918-88), Texier completed his doctoral thesis, which received high honors from the Sorbonne University in 1981. Subsequently, he started a habit of nomadic stays in Europe, USA, and Asia to paint and to exhibit. In 2003, he made a sword for his friend Zao Wou-ki (b.1921), the international Chinese abstract artist, on the occasion of Zao’s election into the prestigious L’Institute de France, as a member of the “ Academie des Beaux-Art”. Texier exhibited at the Shanghai Art Museum for the Year of France in China 2004-5 and his works have been collected by the Foundation of National Contemporary Art in France and the French state, among others.
The artist will present for the opening on 23 May 2007 (6pm-7:30pm). A catalogue of the exhibition is available.