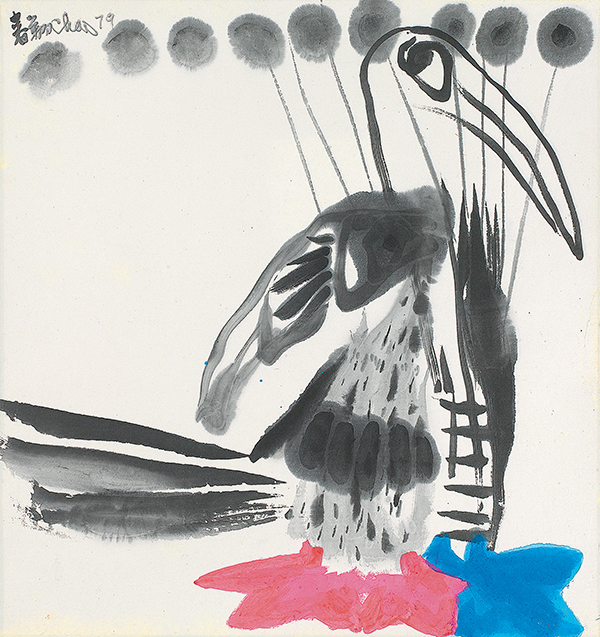 Chao Chung-Hsiang
Introduction
Alisan Fine Arts is proud to showcase a solo exhibition of Chao Chung-hsiang, one of the most important Contemporary Chinese artists in the 20th century. This exhibition will feature around 20 works painted from 1970s to 1980s in New York, half that have never been exhibited before. This will be the first solo exhibition we have held for Chao since 2004. Like Zao Wou-ki and Chu Teh-chun, Chao studied under the great master Lin Fengmian at the Hangzhou National College of Art. He belongs to the first generation of Chinese diaspora who left the mainland in the 1950s and settled in the United States to further develop their artistic careers. Blending the Yin and Yang Taoist philosophy with Abstract Expressionism, Chao’s playful birds and fish combined with bold and sometimes fluorescent ink splashes are iconic of his art.

Alisan Fine Arts has been managing the estate of Chao Chung-hsiang since the artist passed away in 1991. We have organised four major solo exhibitions and numerous group exhibitions for Chao, including two overseas travelling shows in 2000 and in 2004 respectively which included China, Singapore, France, Taiwan and Hong Kong. We have published 4 major catalogues of Chao Chung-hsiang’s work which together form the most comprehensive record of his lifelong career. We last showcased his painting in the gallery’s 35th anniversary exhibition at the Central Public Library in Hong Kong last year. The chosen work was previously featured in the Guggenheim exhibition: China 5000 Years – Innovation and Transformation in the Arts in 1998. With this current exhibition we hope to revisit Chao’s beautiful paintings and reexamine his contribution to the Contemporary Chinese art world.

In her introduction to Chao Chung-hsiang, the second catalogue the gallery produced for the artist, gallery director Alice King noted “to Chao, painting was not merely a pictorial representation but a continuous thought process related to one’s spiritual well-being and outlook on life. He worked tirelessly to ensure that contemporary Chinese painting would become part of the mainstream and not a mere tributary of Western art.”

Brilliant disciple of Lin Fengmian
Born in Henan in 1910, Chao had studied at the Hangzhou National College of Art under Lin Fengmian, during that era, the Hangzhou National College of Art was the most liberal art school in China. There Chao was exposed to Western techniques and, but more importantly, he was encouraged to create his own style rather than simply strive for technical perfection. After graduating in 1939, he continued to paint, exhibit and lecture both in China and, after 1949, in Taiwan where he taught at the Normal University. In 1956, he won a fellowship to study in Spain, taking the opportunity to tour Paris and Europe as well. Having had the opportunity to see the works of Western contemporary artists at the time, was pivotal in the development of his work. As stated by Martina Koppel-Yang, Curator of Rockbund Art Museum: “Soulages and Hartung, whose works he had seen during his residence in Spain and Paris (1956-1958), had left a deep impression on him. The calligraphic qualities of abstract expressionism, and the spontaneous gesture of automatism are evident in his paintings.”

Avant Garde Artist in New York
Settling in New York City in 1958, Chao entered a cauldron of ideas and influences that led him to forge a new visual language. He was attracted to Abstract Expressionism and moved in its circle. He exhibited his work in such avant garde centres as the Guild Hall and Parrish Museum in the Hamptons, Brooklyn Museum in Brooklyn and Queens Museum in Flushing. Robert Moes, curator of Asian Art at the Brooklyn Museum at the time of Chao’s exhibition wrote about his art in the exhibition catalogue: “For the past twenty years, Chao has lived in New York City. He has been strongly influenced by the work of several recent American painters, particularly Franz Kline and Jackson Pollock. With Kline’s influence on Chao, art came full circle, since Kline in turn had been deeply influenced by Chinese calligraphy.” After more than thirty years in New York City, he moved to Hong Kong in 1989, then to Chengdu, and finally to Taiwan where he passed away in 1991, at the age of eighty-one.

Bridge between East and West
His work strikes a balanced harmony that bridges two disparate cultures. He combines all the graphic and calligraphic possibilities of Chinese ink and the traditional themes of flowers and birds, and marries them to the energy and dynamism of Western geometrical form and acrylic colour. The main subjects of Chao's work include birds and fish, the cosmos and abstraction. From 1970s he painted the Yin-Yang symbols and hexagrams, which are derived from the I-Ching. Blocks of dazzling florescent colour sporadically float upon expressive images rendered in rich ink washes. His works permeate with references to Buddhism, Taoism and Confucianism. In describing his work fellow artist, curator and critic, Lang Shaojun wrote: “Chao’s symbolic expressions were rooted in literati painting and folk art. Since they have incorporated the abstraction and techniques of Western painting, their structure and style differ greatly from the traditional ideology, but rather demonstrate a vivid sense of modernity. In Chinese eyes, his works are close to Western paintings, but in Western eyes, they remain Chinese art.”


Selected Awards and Museum Collections
In 1972, Chao won the New York Creative Artists Public Service Program Award. From 1997-99 his works were exhibited in the important travelling group exhibition Asian Traditions/Modern Expressions, organised by the Jane Voorhees Zimmerli Art Museum, Rutgers University. His work was also included in the exhibition China: 5,000 Years held at the Guggenheim Museum in 1998, Shanghai Ink Biennial at Zhu Qizhan Art Museum, Shanghai in 2007, and New Ink Art: Beyond and Innovation at Hong Kong Museum of Art in 2008.