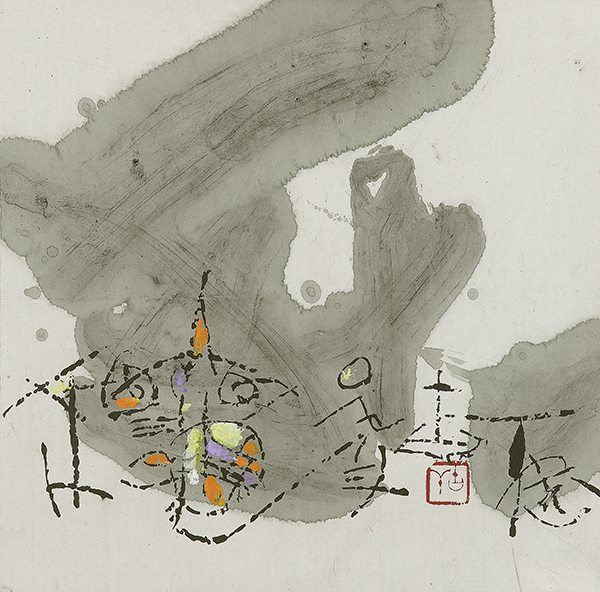 Gu Gan Catalogue
Introduction
Gu Gan a pioneer in revolutionizing Chinese calligraphy into a contemporary art form is probably best known as the first Chinese artist to have created a wine label for Mouton Rothschild in 1996. He joins other international artists Chagall, Miro and Picasso, and with this honour. Rooted in the age-old Chinese tradition of calligraphy, his paintings vary from bold calligraphic strokes to fine lines combined with images such as trees, flowers, fish or the Buddha to form an abstract work. While there are now other internationally recognized contemporary artists, such as Luo Qi, Wei Ligang, and Wong Dongling who are pursuing this art form, Gu Gan is considered the fore father. In his efforts to revitalize calligraphy he formed the Modernist School of Chinese Calligraphy and in 1985, he organized a groundbreaking “Modern Calligraphy Exhibition” at National Art Museum of China in Beijing, soon after gaining international recognition. His works are collected by the Ashmolean Museum, Oxford, the British Museum, London, The Museum of East Asian Art, Cologne, and the National Art Museum of China, Beijing,
Alisan Fine Arts is honoured to present our first solo exhibition for Gu Gan, featuring 18 abstract calligraphic paintings dating from 1993-2006 on his self-made paper as well as on rice paper.

About the artist
Gu Gan (born 1942 Changsha, Hunan, China) studied traditional Chinese painting at Central Art Academy in Beijing in 1962. During the Cultural Revolution (1966-76), he was forced to work as a labourer in the printing industry for ten years. In 1975, he was assigned to work in the People's Literature Publishing House. At the same time, Gu discovered with ardent interest the work of Western modern art artists such as Wassily Kandinsky, Paul Klee and Joan Miró, Currently he lives in Beijing and is the chairman of Society of Modern Calligraphy and Painting.
In most of his works, Gu Gan uses painted shapes and symbols combined with Chinese characters to form his powerful abstract art. He seeks to remain true to Chinese tradition, while at the same time taking a profoundly contemporary innovative approach. To him, writing calligraphy and painting pictures are no different. He brings colour to calligraphy, creating a new visual language that has an important impact on the development of modern calligraphy. Gu Gan’s meditative art is a voice for world harmony as new as today and as old as time.
In 2008, Gu Gan created a series of 33 sport calligraphy paintings. One artwork depicting the five Olympic rings was created to commemorate the 2008 Olympic Games hosted by Beijing. He has had numerous exhibitions around the world including USA, UK, Germany, Austria, Switzerland, Spain and China.