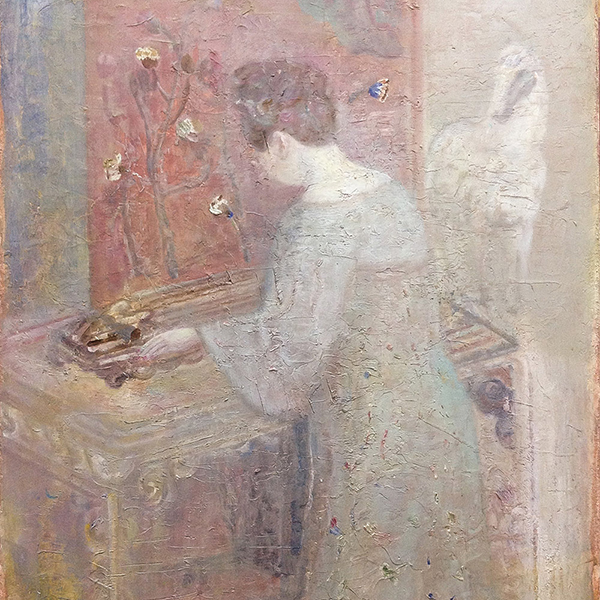 Leng Hong
Introduction
Alisan Fine Art is delighted to present a solo exhibition of Leng Hong’s most recent paintings as part of Le French May, twenty years after our exhibition of his works in 1994 during the second Le French May. Leng Hong, born in 1955 Shanghai, is a celebrated Chinese-French artist acclaimed for his masterful oil paintings that are imbued with rich colours, thick in texture, and ‘mysterious’ in feeling. His oeuvre varies in subject matter, from landscape and still life scenes to portraits of ladies in waiting from the Tang and Song Dynasties. The title of the exhibition and artworks are inspired by Leng Hong’s experiences living in France, and the untitled poem (As Last Night Twinkle Stars, As Last Night Blows the Breeze) by the Tang poet Li Shangyin. The poem is particularly ambiguous as evident by the first line “As Last Night Twinkle Stars, As Last Night Blows the Breeze”; in classical Chinese the stars may signify the past or present, while the breeze could be lovers under the moonlight, or a reference to morals and decency. Li’s works, like Leng’s, are cryptic and often allusive, resonating with meaning and imagery.
Included on display are his romantic vignettes, such as “Caress of the Moon-13 IV”, the colours appear reminiscent of Marc Chagall and inspired by Tang and Song Dynasty poetry; while his compositions seemingly reference American-French Impressionist artist Mary Cassatt; indicating a style clearly influenced by European Expressionism and Cubism. Also on display are exquisite Chinese-French landscape and architectural scenes, considered privileged subject matter in Chinese and Western painting, and still life portraits. Since 1988 the gallery has been representing Leng Hong and has held numerous solo exhibitions of his works.
Leng graduated from the Shanghai Institute of Theatre and Dramatic Arts, where he learned to paint in the academic European tradition and mastered techniques in perspective, chiaroscuro, modelling, and social realism. He also studied traditional Chinese brush and ink painting, and was particularly drawn to Tang and Northern Song landscape paintings by the great masters Yan Liben (601-673 C.E.) and Fan Kuan (dates unknown). In 1986 after moving to Bordeaux, France, he began experimenting, seeking ways in which to draw aesthetic inspiration from each tradition. In 1987, Alisan Fine Arts organized the landmark exhibition “A State of Transition, Contemporary Paintings from Shanghai” at the Hong Kong Arts Centre, on showcase were fourteen Shanghainese artists, including Leng Hong. In the introductory essay the art historian and curator Joan Lebold Cohen wrote: “In the Romantic Realism of Leng Hong’s ‘Boundless Sea’, a combination of China and Western academic training are revealed.”
That same year he was also awarded the Grand Prize “Nouveau Talent” of the Federation Nationale de la Culture Française. Since then, he has had numerous exhibitions in China and overseas, including at the Musée des Beaux-arts de Bordeaux, Musée de Pau, Chateau d'Issan, Shanghai Art Museum, and National Art Museum of China. Recently his artwork was featured on French Television, broadcast on FR3, and Shanghai Television. He currently resides in Montreal, Canada, and is also an adjunct professor in the department of Fine Arts at the University Shanghai.

Leng Hong’s paintings refuse to be neatly categorized as Eastern or Western, historical or contemporary. Rather he strives to create works that transcend the boundaries of these binaries and possess a universal appeal. Specifically, Leng utilizes oil painting -traditionally a Western medium- to‘illuminate’ China’s distant and dreamlike past, while expressing the splendor of contemporary life. In doing so, he creates a feeling of nostalgia (translated from眷戀) for a fleeting or golden moment of history; or dreamscapes amongst the stars and breeze. For Leng, a single image can contain multiple scenes, or viewpoints, and he combines chiaroscuro with single plane distortion to create depth while manipulating light and shadow. The universe Leng Hong unveils for his audience is one of suspended time, an ancient town, forgotten and abandoned.