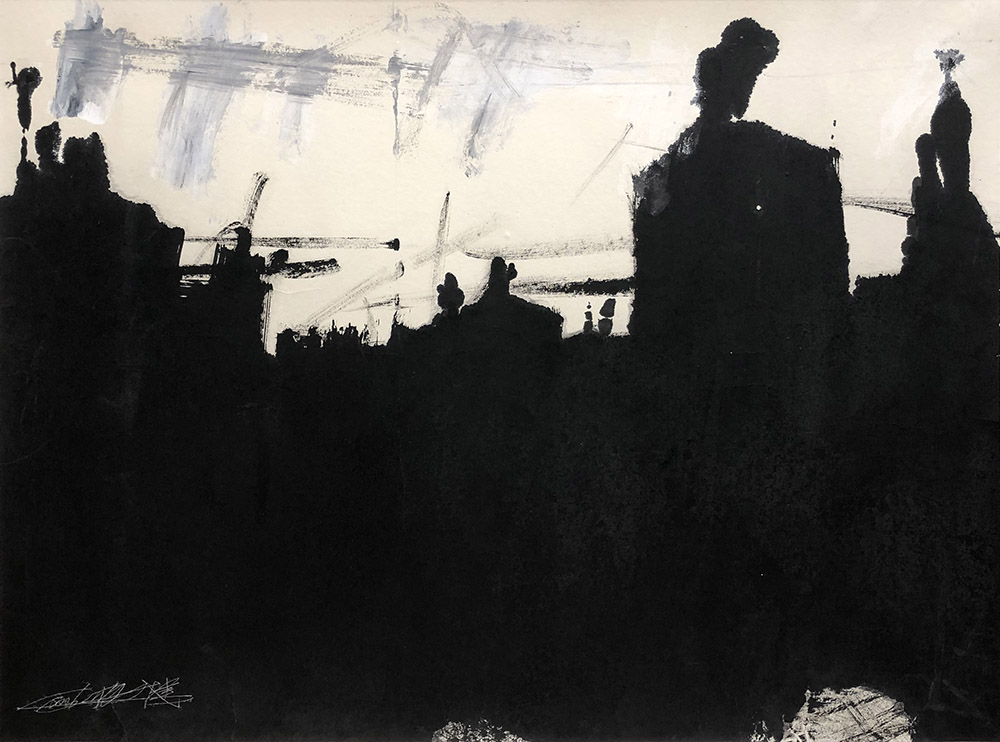 Yang Xiaojian
Introduction
Alisan Fine Arts is pleased to present our first solo exhibition for the contemporary artist Yang Xiaojian, whose bold revival of classical calligraphy into a form reflective of Western abstract expressionism has earned him the title of "the Oriental Ink Beast." In these large works on paper, the artist deconstructs Chinese ideograms into power-fuelled, ambitious compositions that challenge conventional East-West categorisation. In the words of Professor Fan Di’an, Director of the National Art Museum of China Curator for Contemporary Art: "Yang Xiaojian is an artist who challenges both native tradition and western influence with a Chinese medium—the ink and wash—an art form that he committed himself to for the last 20 years, proving in the process that art is both a means of spiritual redemption and an action of cultural transcendence of universal significance."

As a child, Yang Xiaojian (b. 1960 Shanxi, China) was encouraged creatively by his mother, a primary school art teacher. In the early '70s Yang's primary studies were abruptly halted and he endured the hardship of farm labour. He later attended a traditional secondary school and served a short stint in the Beijing Military Area Command artillery unit. In the late '70s, Yang manifested a strong interest in illustrations, artistic calligraphy and masthead design, and frequently copied calligraphy and illustrations. In the early '80s he found tutelage under Masters Yan Jun and Yuan Xulin, from whom he studied the ancient calligraphy style of the Han Dynasty called Han Li, and Master Tian Shuchang, with whom he explored the cursive calligraphic styles of Yan Lugong and Fu Shan.

Yang proliferated this cursive style and in 1987 received an award for his pursuit of self-improvement through independent study by the Taiyuan Labour Union. In that same year, Yang created a plaque for Shan Nian Temple in Anshou Country, Japan and won an award of merit in the National Hard-tipped Calligraphy Competition. Since his graduation in 1989 from the Correspondence University of Chinese Painting and Calligraphy, Yang has received several accolades, including the highest "gold" prize in the Tianya Cup International Calligraphy Contest and 3rd prize in the Kele Cup Calligraphy Contest” (Both 1990s, China).

In the 90s and 2000s Yang shifted his style to embrace the expressive conceptions he admired in artists such as Motherwell, Dubuffet, Sulerque, De Kooning, De Pierce, and even Marcel Duchamp. Freely borrowing from the Abstract Expressionist movement, a monolithic interpretation of calligraphy began to emerge. Pulling references from poetry, the Bible, architecture and pure feeling, Yang’s explosive abstractions quickly gained him attention outside of the calligraphic arts. The modern calligraphic artist Wei Ligang, with whom Yang held a dual exhibition at Beijing's Today Museum in 2005, called Yang’s new style of expression ‘ink fauvism.’ This comparison suggests the rawness of emotion delivered by Yang's abstractions, and their ability to reveal the true essence of the hanzi. The result is an explosive revival of tradition. This exhibition showcases his works drawn directly from the Chinese ideogram, to those of pure abstraction, and another from an extensive more figurative series with the subject of wooden ships.

To use again the words of Professor Fan D’ian, Yang Xiaojian may indeed be “first of all a calligrapher” but he has far surpassed this narrow categorisation. He is a complete living artist, working daily as a photographer, calligrapher and painter. In 1999 Yang established the Yang Xiaojian’s Artistic School and built his first studio Daming Hall, followed by the establishment of Blacksight Studio in the Moganshan M50 Art Zone, Shanghai, China (2005). He has published several books, including "My 2007 Collection of Personal Photography Works" (2007), "The Oriental Ink Beast" (2007), and "My Empire of the Sun" (2006). His works are featured in several publications, including the "Collection of International and Modern Calligraphy and Seal Carving of the 20th Century" and the "Dictionary of Contemporary Painters and Calligraphists". Important collections include Shanghai’s National World Financial Centre and the Art Gallery of North Kamakura, Japan. Alisan Fine Arts formerly featured Yang in two dual shows, "Contemporary Calligraphy: New Works by Wei Ligang & Yang Xiaojian" in 2009 and "Abstraction — Calligraphic works by Yang Xiaojian and Shao Yan" in 2015.